Boardwalkers: These 10 Altcoins Are Rising Incredibly! 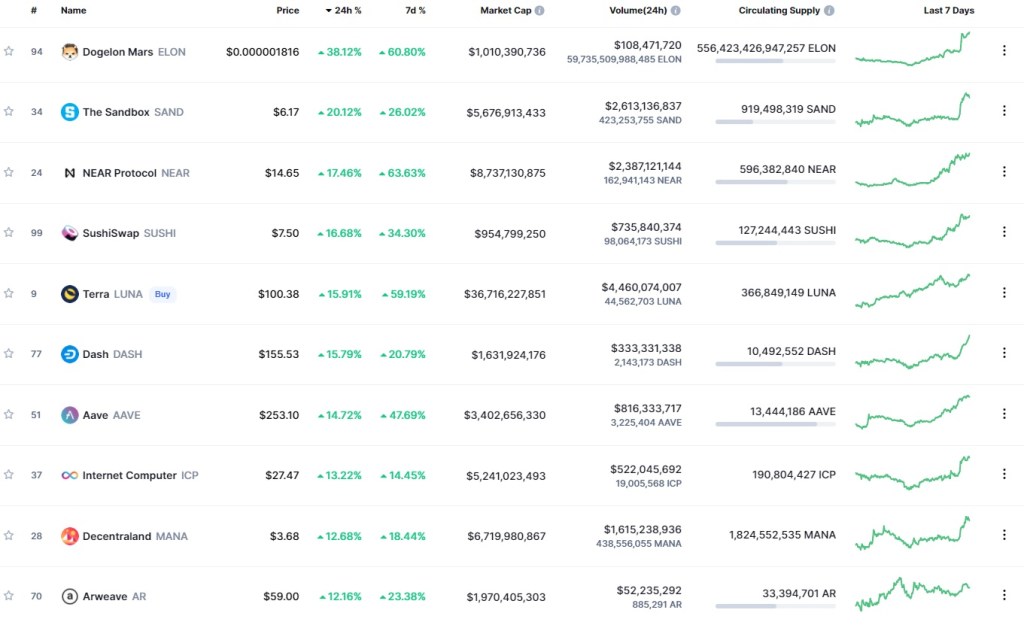 Bitcoin has surpassed $50,000 and the entire cryptocurrency market has turned green. While many altcoins in the top 100 by market value are on the rise, 10 stand out. Cryptocoin. com we review them…

The most valuable altcoin of the day was Dogelon Mars (ELON) with 38. 12 percent. ELON also managed to break into the top 100 with its latest rise. The meme coin, named after Tesla CEO Elon Musk and his great passion Mars, gained momentum with its listing on Huobi, one of the major cryptocurrency exchanges. In addition, the exchange also announced that the ELON airdrop will be held.

Second, the popular metaverse and its coin The Sandbox (SAND) were up 20.12 percent. There is an important development behind the rise of SAND. PwC Hong Kong, an international subsidiary of the global organization PricewaterhouseCoopers (PwC), announced on Thursday at The Sandbox that it has entered the metaverse space with the acquisition of LAND. Although the cost of the LAND entity was not disclosed, it was stated that PwC Hong Kong plans to set up a Web 3.0 consultation center to facilitate the next generation of professional services, including accounting and taxation.

Third, the NEAR token of the layer 1 blockchain NEAR Protocol rose 17.46 percent. NEAR has grown as a result of its partnership with Terra. In fourth place, popular decentralized exchange SushiSwap’s SUSHI token seems to have surged 16.68 percent. SUSHI is currently voting on governance. In fifth place is Terra (LUNA). Terra, an open-source stablecoin network, has reached an all-time high of $20.05 billion in terms of total value locked across 13 product offerings, according to industry data. This amount marks a 68 percent increase since December 1. This means that platform users invest large sums in the protocol to receive staking rewards.

The other 5 altcoins also gained more than 10%

In addition to the above, Dash (DASH), which aims to establish a fast and inexpensive global payment network, rose 15.79 percent. Aave (AAVE), one of the popular platforms of decentralized finance, followed DASH with 14.72 percent. After these, Internet Computer (ICP) experienced a 13.22 percent increase in value. On Wednesday, Psychedelic, a Web 3.0 development studio building solutions for Internet Computer, launched Terabethia, a cross-chain contract communication and asset mirroring protocol.

Finally, Decentraland (MANA) and Arweave (AR) gained 12.66 and 12.16 percent respectively. Metaverse Decentraland is having a “snowball fight” in the virtual world and holding sweepstakes.