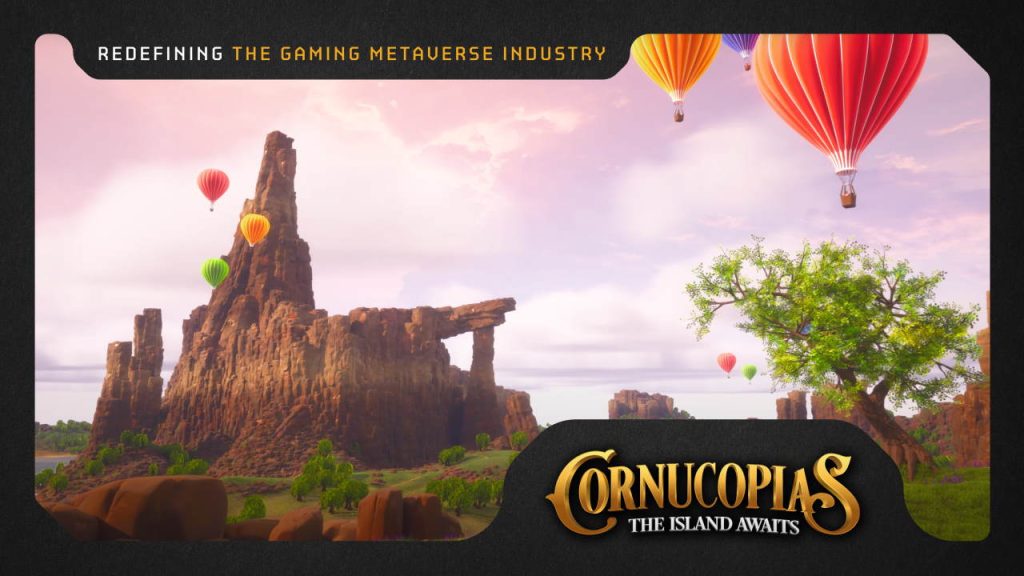 Cornucopias: A Revolutionary Cardano Blockchain Project That Is Redefining the Gaming Metaverse Industry

PRESS RELEASE. The metaverse is a virtual world that allows millions of players to live beyond their immediate environment. With blockchain technology, users can create, own and utilize digital assets while interacting with other people in the virtual space.

Cornucopias ‘The Island’ is a play-to-earn, build-to-earn, learn-to-earn, host-to-earn MMORPG game powered by the blockchain. In a world of unique domes, players can own land and other NFT-based assets which can be traded with other users on Cornucopias’ marketplace and many secondary market places. Cornucopias is a fun, safe and expanding metaverse with one of the most positive and engaged communities of any blockchain-based project.

With the excitement of metaverse innovation sweeping the globe, there is an extremely high demand for the first Cornucopias land sale, which is expected to sell out in record time. Cornucopias NFT projects have a track record of completing successful sales with the right balance of supply and demand. For example, Cornucopias NFT2tree philanthropic NFTs sold out in under 20 seconds and planted close to 50,000 trees in Senegal, Africa, and that number increases daily in perpetuity. Bubblejett NFTs sold out with Mythic rarity hitting over 100x value on secondary markets. In addition, the GTI Javelin NFT sold out despite experiencing a system pause, and the community benefited when the Cornucopias team decided to gift the GTI Javelin NFTs for free to thank their extremely positive community for their patience.

The main objective of Cornucopias is to lead the metaverse industry through its highly innovative ecosystem. Furthermore, the Cardano blockchain supports the game with a thriving community passionate about physical and digital projects. Therefore, Cornucopias is gaining the attention of metaverse enthusiasts, gamers and the mainstream audience around the world, with new members joining the community at a highly accelerated rate.

Cornucopias ‘The Island’ is more than just a blockchain-based game because participants can do more. In traditional gaming, players repeatedly pay through micro-transactions, subscription fees, DLC packages, and other money-grabbing mechanisms that generate over $300 billion in annual revenue for traditional game developers. As large traditional game developers struggle to crack the code on the blockchain-based games that are the future of the industry, Cornucopias is perfectly positioned to claim a large portion of the gaming industry pie.

The new gaming model is with NFT assets, it provides the exact opposite user experience. Instead of repeatedly making in-game purchases to ‘unlock’ game content, players only need one purchase to own an NFT for life, or sell it on the secondary market. The benefits of this ownership for players include a plethora of perks, rewards, and privileges. As a result, owning a Cornucopias NFT allows players to possess an ‘unprecedented utility’ that unlocks various features and in-game advantages, with the future of using those same owned assets in other games and on other blockchains.

Participants are freed from paying monthly membership fees because the Cornucopias game is free-to-play, which gives everyone on the planet the ability to take advantage of the opportunity to join the metaverse, and play the games it contains and much more. Players can sell their NFTs, trade them with someone else, or stake them for additional rewards.

In addition, ‘The Island’ combines gaming with real-world commerce and gives opportunities for

traditional and e-commerce companies to own land in the metaverse, sell and promote their real-world brands, goods and services to a hard-to-reach global audience that they have potentially never had access to before.

The project is easily accessible worldwide and is built on the latest Unreal Engine 5 games engine. This software makes the game compatible with PCs, mobile phones, game consoles and smart TVs. As a result of Cornucopias’ bold strategy to become the first AAA UE5 blockchain based game, Cornucopias is ahead of the competition and already has the attention of global brands, the growing crypto community, game developers, 3D artists, and the game enthusiasts that will power and run the governance of the self sustaining ecosystem.

More development for the future

The NFT2Tree mints are a test program for Cornucopias internal NFT sale, mint and marketplace system, which will be used in the upcoming land sale, and an opportunity to provide real-world eco and sustainability value, with all monies from the sale going to plant trees in Senegal, Africa. As a project that wants to impact both the digital and physical world, Cornucopias intends to kick off many other philanthropic NFTs.

Furthermore, 100% of the secondary market sales commission will be used to plant real trees into perpetuity, with the hope of automatically sustaining an increasing positive impact.

Cornucopias is also launching the first of many mobile mini-games in Q3 2022, the PC game in Q4 2022 and consoles in 2024 to maintain its highly aggressive road map.

Cornucopias ‘The Island’ is a massive play-to-earn, build-to-earn, host-to-earn, and learn-to-earn blockchain-based game where players can be rewarded with and/or own land, properties and other NFT-based assets with real-world value, all by playing games in a fun and safe metaverse.

To learn more about Cornucopias ‘The Island’, click on the links below.

According to data provided by Lookonchain, a successful investor made 1,525 Ether profits on APE and 7 altcoins.